Fastest way to take screencaps out of videos

tl;dr Don't run ffmpeg over HTTP(S) and use ffmpegthumbnailer

At work I work on something called Air Mozilla. It's a site for hosting live video broadcasts and then archiving those so they can be retrieved later.

Unlike sites like YouTube we can't take a screencap from the video because many videos are future (aka. "upcoming") videos so instead we use a little placeholder thumbnail (for example, the Rust logo).

However, once it has been recorded we want to switch from the logo to an actual screen capture from the video itself. We set up a cronjob that uses ffmpeg to extract these as JPGs and then the users can go in and select whichever picture they like the best.

The command to extract them looks something like this:

The script I used first was: ffmpeg1.sh

My first experiment was to try to extract one picture at a time, hoping that way, internally, ffmpeg might be able to optimize something.

The second script I used was: ffmpeg2.sh

The third alternative was to try ffmpegthumbnailer which is an intricate wrapper on ffmpeg and it has the benefit that you can produce slightly higher picture quality too.

The third script I used was: ffmpeg3.sh 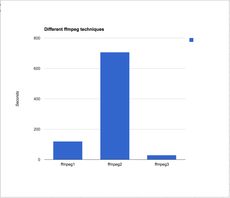 And running these three depend very much on the state of my DSL at the time.

Clearly it's not efficient to do one screenshot at a time.
Because with ffmpegthumbnailer you can tell it not to reduce the picture quality the total weight of the produced JPGs from ffmpeg1.sh was 784Kb and the total weight from ffmpeg3.sh was 1.5Mb.

Just to try again, I ran a similar experiment with a 35 minutes long and 890Mb mp4 file. And this time I didn't bother with ffmpeg2.sh. The results were:

So that means that using ffmpegthumbnailer is about 5 times faster than ffmpeg. Huge difference!

And now, a curveball!

The reason for doing ffmpeg -i https://... was so that we don't have to first download the whole beast and run the command on a local file. However, in light of how so much longer this takes and my disdain to have to install and depend on a new tool (ffmpegthumbnailer) across all servers. Why not download the whole file and run the ffmpeg command locally.

So I download the file and it's slow because of my, currently, terrible home DSL. Then I run and time them again but just a local file instead:

Did you see that!? That's an insane difference. Clearly doing this command over HTTP(S) is a bad idea. It'll be worth downloading it first.

On Stackoverflow, LordNeckBeard gave a great tip of using the -ss option before in the input file and now it's much faster. At this point. I'm no longer interested in having to bother with ffmpegthumbnailer.

ffmpeg2.1.sh same as ffmpeg2.sh but a downloaded file instead of a remote HTTPS URL.

ffmpeg2.2.sh as ffmpeg2.1.sh except we put the -ss HH:MM:SS before the input file.

And again, I re-ran this again against a bigger file that is 1.4Gb:

well i might be a tad bit late but...this is the expected reaction and its neither the fault of https nor ffmpeg. if you ask ffmpeg to capture a frame at 10 seconds for example, it will have to wait until your slow internet downloads 10s worth of content from your server before it can do what you asked it to...when its on your local machine its directly accessible so the processing time will of course drop significantly.

Related by keyword:
How to rotate a video on OSX with ffmpeg 3 January 2018