Whatsdeployed was a tool I developed for my work at Mozilla. I think many other organizations can benefit from using it too.

So, on many sites, what we do when deploying a site, is that we note which git sha was used and write that to a file which is then exposed via the web server. Like this for example. If you know that sha and what's at the tip of the master branch on the project's GitHub page, you can build up an interesting dashboard that allows you to see what's available and what's been deployed. 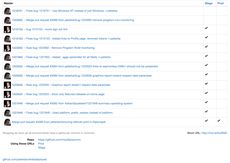 The other really useful case is when you have more than just one environment. For example, you might have a dev, stage and prod environment and, always lastly, the master branch on GitHub. Now you can see what code has been shipped on prod versus your staging environment for example.

This is one of those far too few projects that you build quickly one Friday afternoon and it turns out to be surprisingly useful to a lot of people. I for one, check various projects like this several times per day.

The code is on GitHub and it's basically a tiny bit of Flask with some jQuery doing a couple of AJAX requests. If you enjoy it and use it, please share.

Blogged about a facelift, Jan 2018

Looks like a very handy tool and simple to integrate too.

The link on the first word of the article is missing an "s".

Thank you for the correction!

Related by category:
Best practice with retries with requests 19 April 2017 Python
How much faster is Redis at storing a blob of JSON compared to PostgreSQL? 28 September 2019 Python
Fastest way to find out if a file exists in S3 (with boto3) 16 June 2017 Python, Web development
Interesting float/int casting in Python 25 April 2006 Python
How to throttle AND debounce an autocomplete input in React 01 March 2018 Web development