My contribution to 2021 Earth Day: optimizing some bad favicons on MDN Web Docs

tl;dr; The old /favicon.ico was 15KB and due to bad caching was downloaded 24M times in the last month totaling ~350GB of server-to-client traffic which can almost all be avoided.

How to save the planet? Well, do something you can do, they say. Ok, what I can do is to reduce the amount of electricity consumed to browse the web. Mozilla MDN Web Docs, which I work on, has a lot of traffic from all over the world. In the last 30 days, we have roughly 70M pageviews across roughly 15M unique users.
A lot of these people come back to MDN more than once per month so good assets and good asset-caching matter.

I found out that somehow we had failed to optimize the /favicon.ico asset! It was 15,086 bytes when, with Optimage, I was quickly able to turn it down to 1,153 bytes. That's a 13x improvement! Here's what that looks like when zoomed in 4x: 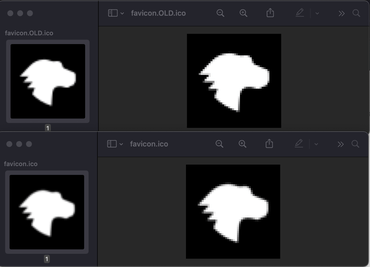 The next challenge was the Cache-Control. Our CDN is AWS Cloudfront and it respects whatever Cache-Control headers we set on the assets. Because favicon.ico doesn't have a unique hash in its name, the Cache-Control falls back to the default of 24 hours (max-age=86400) which isn't much. Especially for an asset that almost never changes and besides, if we do decide to change the image (but not the name) we'd have to wait a minimum of 24 hours until it's fully rolled out.

Another thing I did as part of this was to stop assuming the default URL of /favicon.ico and instead control it with the <link rel="shortcut icon" href="/favicon.323ad90c.ico" type="image/x-icon"> HTML meta tag. Now I can control the URL of the image that will be downloaded.

Our client-side code is based on create-react-app and it can't optimize the files in the client/public/ directory.
So I wrote a script that post-processes the files in client/build/. In particular, it looks through the index.html template and replaces...

Plus it makes a copy of the file with this hash in it so that the old URL still resolves. But now can cache it much more aggressively. 1 year in fact.

Combined, we used to have ~350GB worth of data sent from our CDN(s) to people's browsers every month.
Just changing the image itself would turn that number to ~25GB instead.
The new Cache-Control hopefully means that all those returning users can skip the download on a daily basis which will reduce the amount of network usage even more, but it's hard to predict in advance.

Previous:
How to simulate slow lazy chunk-loading in React 25 March 2021
Next:
What English stop words overlap with JavaScript reserved keywords? 7 May 2021